AWB/UIA will be at the Reframing Urban Resilience Conference from 10th to 12th in Barcelona. See you there!

AWB/UIA will do a lecture related to the new Paper published at Ecology and Society Journal: Urban Resilience thinking methodology applied for Cities Dynamics Analysis by Rafael de Balanzo . 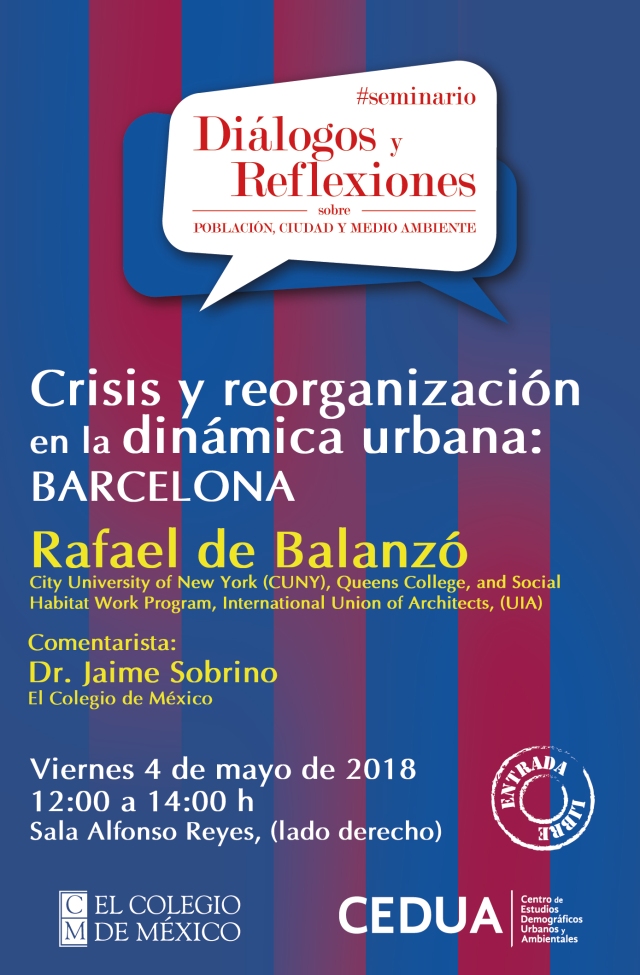 The 11thInternational Forum on Urbanism will address this need by bringing together a wide range of global experts to discuss how we can minimize trade-offs and maximize synergies in efforts to enhance resilience and sustainability in the face of climatic, environmental, and socio-economic challenges. To this end, this 11th  International Forum on Urbanism banner will focus on the theme: “Reframing urban resilience implementation: Aligning sustainability and resilience”

To maximize global participation in this debate on urban resilience and sustainability, the 11thInternational Forum on Urbanism Conference will have a special format – it will consist of two linked international conferences: (1) an international forum in Barcelona, Spain, and (2) an international forum in Jakarta, Indonesia. The first forum in Barcelona will take place from 10 to 15 December 2018 (specific times and dates TBD) and will be part of the event ‘Barcelona Resilience Week,’ during which the city celebrates its resilience with a range of public activities and with the involvement of UN Habitat as co-organizer, and the support of ICLEI, the Rockefeller 100RC initiative, METROPOLIS, the UNESCO IHE, the Global Alliance for Urban Crises, the International Union for Conservation of Nature, and ECOLISE among others,

Although the 11th International Forum on Urbanism Conference is poised to advance urban resilience and sustainability globally, we wish to start the debate now. Addressing tough trade-offs and identifying synergies requires that we as a network take change and move beyond simply delivering a research presentation or publishing a conference proceeding. Moreover, consensus among the Urban Resilience Research Network is that nobody likes to write conference papers per se. Thus, we have created multiple options for conference participation for you to choose from:

To learn more about the event, please check out the new Conference Website. There you can learn more about the four proposed focus areas for the conference and you can then turn one of the proposed research questions (or one you feel is relevant and missing) into a novel abstract for publication in a journal or blog post. We also invite proposals for panels, side events, or orther ideas for how to make an impact in Barcelona and Jakarta and maximize the forum experience.

Art and Resilience Thinking Against Austerity is an art and urban research project engaging artists, urban experts and activists in two distinct ways: first by focusing on the artistic representation of local histories of resistance against displacement, gentrification and the urban cityscape under pressure from austerity measures, and second, by printing imagery on garments, banners and other mobile objects that are to be choreographed into a energetic public procession we are calling the Pageantry ofResistance.

Art Against Austerity advances the scholarship and creative work of all four listed faculty members by offering the chance to work with a new urban community (San Juan, Puerto Rico) at a delicate phase of urban renewal and recovery. This is an urgent time to engage in such work, and offers many unique opportunities and challenges the disciplines of both urban studies and social practice art. This project also represents a significant step forward in the ongoing collaboration between the Art and Urban Studies departments at Queens College, which could be transferred into the development of new coursework or research opportunities for students in the future.

Workshops disseminate these skills to affected populations in both New York and Puerto Rico with the aim of establishing self-replicating DIY collective actions. These Pageants of Resistance also become the visual anchor for actions whose online dissemination seeks to replicate the Art Against Austerity process for use by those engaged in similar struggles at other sites of contention around the globe. Simultaneously, the project is to be publicized and amplified throughout the three grassroots communities via organizing and educational efforts of local activists including San Juan Puerto Rico, all of which are invested in developing Community Land Trusts (CLTs or Fideicomisos) as a means of locally-controlling urban development, preserving cultural forms and narratives, and generating alternatives to the disinvestment, speculation and displacement cycle. Our long-range expectation is to build a sustainable collaborative network that links these various locations together in a combined struggle against disinvestment, speculation and displacement.

The following articulates the existing scholarly/creative work of the four contributing faculty members as relevant to the development of Art Against Austerity:

The urban planner and member of AWB/UIA Lluís Brau died on March 20 at the age of 76. He studied architecture at the School of Architecture of Barcelona (ETSAB) and graduated from Town Planning at the Architectural Association School in London.

Lluís was part of a generation of city planners who began their professional career in the Franco era, a difficult period, in which being a town planner, not only consisted of being a good professional and having good technical knowledge but which, in his case, also went through the direct commitment to support local and associative movements, which were very active.

With democracy, he worked for numerous administrations that asked for advice and technical support, on issues such as housing, equipment deficits and green spaces, sustainable mobility understood as a right, infrastructure or pollution.

He won the 1980-1985 Urban Planning Prize. In recent years, he founded the Ibero-American Association of Urban Planning, and in the meantime worked throughout Spain and in various Latin American and African countries, always consistent in his role as a critical citizen and defender of just causes.

His involvement in defense of the progressive and leftist principles, which he never left in his life, became apparent throughout his entire career.

Lately, he was very active in defense of more sustainable mobility in various articles and conferences. He loved his neighborhood (the town of Gràcia), Barcelona and Catalonia, and was a person open to the world.

Lluís Brau was also a member of the Asociación Española de Técnicos Urbanistas (AETU) and of the Association of Urban Planning Architects (AAUC) of the College of Architects of Catalonia.

Lluís Brau I will not forget it. We were very different, so it seems almost unusual to have collaborated professionally for so many years, sporadically, starting with the writing of the PERI de Gràcia, which was commissioned for many years now, continuing to Architects Without Borders and ending with the Work Program of UIA “Action Without Borders” and our contribution to the UIA Congress in Durban 2014. It had a powerful and incisive critical training that imprimió a very serious pose that alternated with a sense of humor, sometimes difficult. Very jealous of his private life, to the point that when he explained why I had come late to a meeting he said: “Do not tell me your life because I have to explain mine” and, of course, not wanted I liked Lluís, maybe because the relationship with him was never easy what forced us to a great level of sincerity. I repeat, Lluís Brau I will not forget it.

BARCELONA, known for having one of the most thriving contemporary cultures in the world, will host this course and internship. This global city is a MODEL OF SUSTAINABLE URBAN CHANGE for other world cities and offers a rich contemporary culture as well as an important political and historic background. Barcelona’s current mayor, Ada Colau, was a well-known housing activist before becoming the city’s first female mayor. During the month of July, the city will celebrate its vibrant culture by hosting the Barcelona Grec Festival 2018.

This course is a supervised internship with the International Program Work Program “Action Without Borders” (AWB), International Union of Architects, UIA. AWB/UIA has developed HABITAT improvement skills and tools based on over thirty years of experience and case studies applied in different locations including Barcelona. In this BARCELONA INTERNSHIP, EXPERIENTIAL LEARNING will be use to guide students to evaluate the livelihood through the use of resilient thinking &  Habitat Plan analysis tools.

This study abroad course provides a unique opportunity to experience and study Barcelona through lectures and custom-made guided tours to six key neighborhood sites. This course will enable students to UNDERSTAND BARCELONA AND ITS NEW URBAN POLICIES which are focused on promoting a “common good” through the co-management of urban space, initiatives towards social justice and participatory policies

In addition to classroom lectures held at the host institution and students will participate in five-day trips with guided tours to:

Mass-migration, Climate change, and the New Urban Crisis−all caused by different systemic crisis in the environment, the economy and the society− have affected the evolution of the quality of urban life, specifically in Southern Europe and the US. These short and long-term stresses and shocks have brought substantial changes via a Creative Destruction Urban process. Therefore, there is a need to understand, structure and analyze current urban crises in order to achieve resilient cities. Barcelona and NYC case studies are unique cities that share similar process, including the urban social movements in the seventies or the Private-Public-Partnership models lead by Cities Strategic Plans such as the OneNYC plan and Barcelona Sustainability Plan 2012-2022.

In 2015, Ada Colau, one of the multiple activists from the movement against the eviction, became the new elected mayor of Barcelona.  This created a window of opportunity for change in the city’s urban dynamic and their desire for a “common good” that includes social justice, social cohesion, participatory governance, and wellbeing for all.

These two courses offered over the summer in Barcelona provide a unique opportunity to study, experience, compare two major global cities (NYC_BCN) and a new urban crisis process. These courses will prepare students to understand and evaluate urban dynamics that aim at achieving sustainable and resilient cities in a globalization context. Students will learn from a Queens College professor who is originally from Barcelona and has been lecturer at Barcelona Pompeu Fabra University and worked as an urban planner and activist for over 15 years in Barcelona, including during the Great Recession.

PROFESSOR’S BIOGRAPHY AND PRIOR EXPERIENCE IN THE HOST COUNTRY:

Rafael de Balanzo was born and grew up in Barcelona.  After studying architecture in Belgium and traveling to the US, he returned to Barcelona to work as an architect and urban designer and was awarded several architectural prizes.  Professor de Balanzo also holds a PhD in Sustainability and Urban Planning from the Polytechnic University of Catalonia. He has over 15 years of experience teaching at different universities in Europe and the US.  Professor de Balanzo has ample experience managing students exchange programs in Europe (Belgium, UK, France and Finland), as well as ERASMUS faculty.  In addition, he was Director of the Master of Design and Habitat in the ELISAVA School Design and Engineering, Pompeu Fabra University of Barcelona, for over 10 years.

Currently, he teaches at the Economics, Urban Studies and Environmental Studies departments at Queens College at CUNY. He is also member of the International Habitat Cooperation Program on “Action without Borders” for the International Union of Architects. He promotes “Resilience Thinking” through urban participatory process in neighborhoods in crisis in Latin America and Spain.